GamesURide™ mixes the best of interactive rides and games! 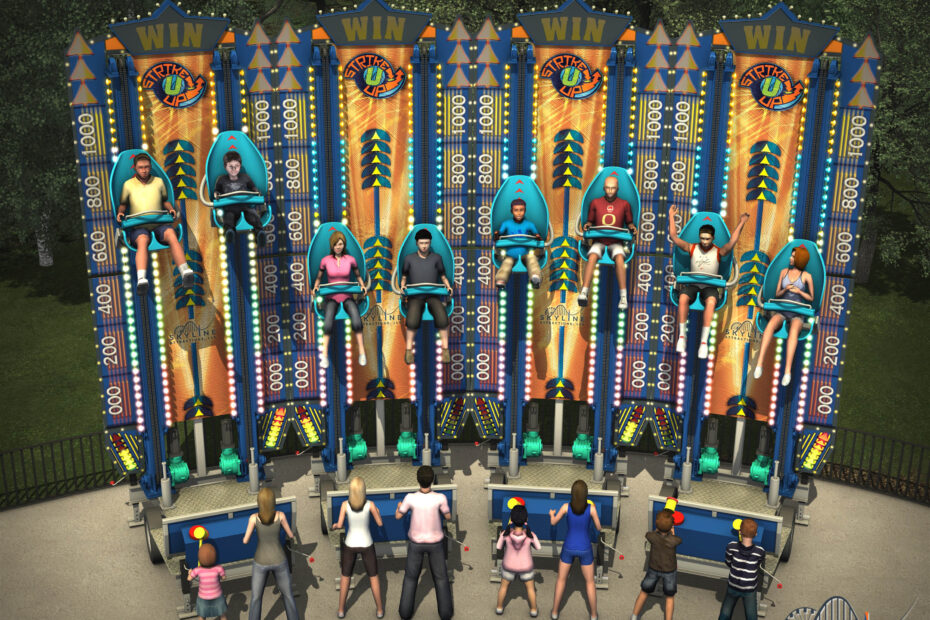 Orlando, FL – Step right up and try your hand at Skyline Attractions’ new GamesURide! GamesURide are the first truly interactive ride-game experiences, allowing you to become a part of your favorite midway games!

Recently-formed Skyline Attractions announced today Strike-U-Up, the first of many GamesURide. Grab a friend and race skyward against as many as seven other teams in the bouncy fun of Strike-U-Up! Test your skills… Strike the target that will send your friend bouncing to the top of the 20-foot tower. Reach the top first to win the game, then switch with your friend and do it again!

Skyline previewed the Strike-U-Up concept with many industry insiders, and the team has been overwhelmed by the positive response. They said, “We knew we were onto something really big with the GamesURide idea, but the feedback we’ve been getting is beyond what we anticipated. Some people have even commented that this is the next big thing to hit the industry.”

Strike-U-Up is a totally new experience that does not exist anywhere else in the world. It is a straightforward concept that anyone can play, and riders only need to be 36 inches tall. It is simple to install and maintain, and requires only one operator.

Two models are available. The lower-cost, fixed-site model requires little site preparation and a small footprint. On top of those benefits, the convenient mobile version of Strike-U-Up folds down for easy towing with any Class III hitch and can fit in a standard eight-foot garage. Both styles require a low-capital investment, with the potential to pay off in less than one season and strike up big profits beyond.

Skyline Attractions will be showing off Strike-U-Up at the IAAPA Expo in Orlando starting November 18 at booth 3278. “We can’t wait to show you just how fun and profitable Strike-U-Up and GamesURide can be!”