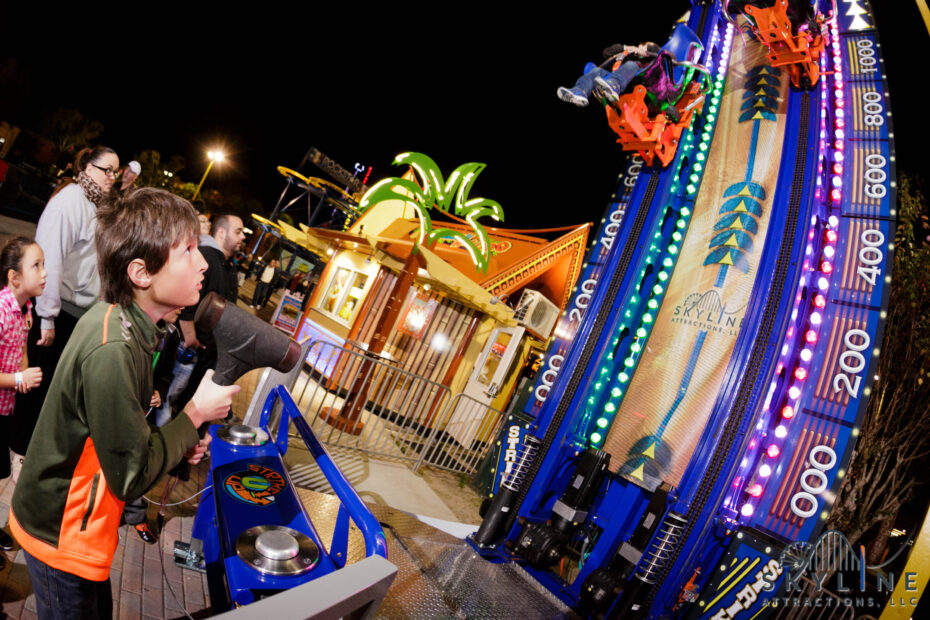 Orlando, FL, USA – After announcing and introducing their first product in November, Skyline Attractions installed a single unit (two-tower) Strike-U-Up at Fun Spot America in Kissimmee, Florida for a 15-day test of viability in the market. The conclusion is a welcome one for the new company, with the revolutionary ride/game combination producing better-than-expected numbers.

John Arie, Jr., Fun Spot’s Chief Operating Officer, witnessed the achievement first-hand. “Strike-U-Up has been a HUGE success at Fun Spot. I was amazed to see so many families play it over and over again.” He added, “Great job Skyline Attractions!”

Out of the 15 operating days, from December 19 to January 4, Skyline operated Strike-U-Up as a midway game for five days, charging $5 per rider/player team and giving prizes to the winners of each game. At the family-owned park, which draws 60% of its approximate annual attendance of more than one million from locals, Strike-U-Up generated enough revenue to prove that many operators will be able to pay off their investment within the first year.

Skyline also tested operation of Strike-U-Up as a ride, for which park guests could scan their wristbands or spend from a redemption card in order to ride. As long as guests were flowing into the park, there was high demand for Strike-U-Up, which often had a queue and was able to accommodate approximately 80 riders per hour with the two-tower setup.

Strike-U-Up performed so well that, during its period operating as a ride, its ridership surpassed all but one of the seven other rides in its category.

The Skyline team is thrilled with Strike-U-Up’s success at Fun Spot, where it has continued to remain a hit since the test period. They note that they are able to accommodate additional orders for the upcoming season for parks wishing to see similar success as Fun Spot America.

Stay updated on our rides,
products, and services!